Back in the 1970’s, I did my dissertation at the University of Chicago under Gene Gendlin on integrating empathic listening and experiential focusing skills into task-oriented groups. It was titled “Expression of Negative Feelings and Explication of Meaning As a Function of Contingent Interruptions and Contingent Listening Responses in Task-Oriented Groups (Boukydis a.k.a. McGuire, K., 1975).

The title says it all. Bitter experiences in feminist and leftist groups of the time had shown me that liberal idealism contributed nothing new to group process.  Work group members still attempted to dominate through interruption and to win their way through argument rather than coming up with the best decision for the group as a whole.

At the same time, I was participating in the decision-making meetings of the first Listening/Focusing community or Changes group (Boukydis a.k.a. McGuire, K., 1984).  Here a kinder, gentler, less competitive process did prevail.  Meetings were calm and nurturing rather than brutal and critical.  In the client-centered tradition of process research, I decided to listen to audiotapes of both kinds of meetings to specify the behaviors that made the difference.

In general, I found that, in the Changes group, people listened instead of interrupting.  Because of the relative peace and quiet, people could speak from their “felt sense” of the whole issue or decision, without fear of interruption, judgment, criticism, and embarrassment.  They could carefully explicate the murky, implicit edge, the “intuitive feel” of the whole situation and possible creative solutions, rather than simply arguing the same pro and con polarized positions until one side “won” by quieting the other.

New ideas and insights, including concerns and negative feelings about proposed solutions, could be shared.  Out of this, new, more cooperative solutions could arise.  These decisions, because they were crafted from and were thus in tune with the “bodily felt sense,” the wants and needs of participants, seemed to have a higher likelihood of actually being carried out.

“How To’s” For Task Groups

Using the “How To’s” as a teaching tool, I intervened in three different task-oriented groups, treating each as an “organism” in a multiple-baseline design (Risley & Wolf, 1973). My goal was to decrease interruptions and increase Listening responses, including both Reflection (“So you are saying…”) and “Asking For More” about words said (“Can you say more about…?”).

I hypothesized that, without the threat of interruption, participants would be more free to pause to make words directly from their “felt sense” of the whole situation. I defined this “explication of felt meaning” behaviorally as a pause of three seconds or more between words during a speaking turn (“It’s …uhh…(3 seconds) something like…”; “Let me see…(3 seconds)…it’s sort of like…”; “I was thinking…ummm…(3 seconds)…it would be better to…”).

Gendlin’s  work with The Experiencing Scale (Gendlin & Tomlinson, 1968) and his model for the creation of new meaning out of direct reference to “felt experiencing” (Gendlin, 1962; Gendlin, Beebe, Cassens, Klein, & Oberlander, 1968) indicate that explicating from the fresh, experiential  “felt sense” increases creativity and problem-solving in individuals. I extended this assumption to explication in group decision-making.

I also hypothesized that the decrease in interruptions would allow participants to express “negative feelings,” concerns and disagreements with proposed decisions or with the group process itself.  Increasing the expression of disagreements had been shown to increase the quality of decisions in other research (Hoffman, 1962, 1964) by avoiding premature closure and increasing the pool of information available.

This was a process experiment.  I did not actually collect data on how the changes in process affected long-term outcomes in terms of decision-making. However, the research of others (Hoffman, 1965; Hoffman, Burke, & Maier, 1965; Hastorf, 1968) suggested that the intervention would lead to greater satisfaction with decisions by group members when they felt they had been able to participate fully in the discussion. Research (Shaw, 1962, 1961; Hoffman & Maier, 1964) also indicated that the actual quality of decisions made, in terms of accuracy and successful action, would be increased when minority opinions were able to be expressed.

Although there was a trend toward decreased interruptions and increased listening responses, and a concomitant increase in explication of felt meaning and expression of negative feelings in some groups, the data were muddied by the fact that baseline measures could be changed simply because a particular group member did not come to a meeting.  For instance, the number of interruptions might decrease simply because a high-interrupting member did not come to a meeting. Also, some members came irregularly and did not have the full benefit of training in the new behaviors.  So there are problems implicit in treating a group as a single organism when the makeup of the group might change from week to week.

However, I have taught the “How To’s” to the many Changes communities which I have started since the 1970’s ( McGuire, 1981, 1984,2007).  They have proven very useful in allowing for the swift resolution of decisions (such as when and where to meet, whether to have snack or not, how to start on time, whether to invite new members, whether and how to plan a weekend retreat) which come before such a group. They have also been used to deal with interpersonal conflicts arising within the group and other issues involving the whole community.

I also used the “How To’s” when I was chairperson  of the Board of Directors of a non-profit organization which had larger decisions to make about staffing, budgeting, programming, and fund-raising. Again, the model allowed for surprisingly efficient, non-contentious, and short board meetings as well as success in terms of reaching major goals.

You will find the “How To’s” for groups under Collaborative Thinking. An article fully describing “The Collaborative Edge Focusing Decision Making Method” and including the “How To’s for Groups” is a free download, also available in Spanish, at the Free Phone Consult icon  at www.cefocusing.com  Dr. McGuire is available for phone coaching and onsite consultation.  Contact [email protected] . 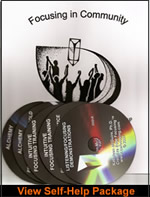